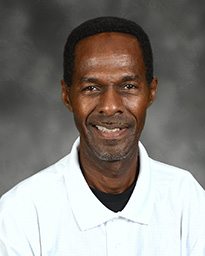 After a long and successful career spanning four decades as a football coach, an administrator, a PE teacher, a basketball coach, a driver’s ed teacher and much more, Coach Kent Johnson announced his retirement this year. Coach Johnson joined P.K. Yonge in 2013; a time when the Blue Wave football nation was ready for new leadership and P.K. Yonge was looking for a new Dean of Students.  In Kent Johnson, P.K, Yonge found a head football coach with wisdom, grace, experience, and determination to remake our football program.

Prior to his years with P.K. Yonge, Coach Johnson assumed his first head coaching job in 1993 with Hawthorne High School, for track and field, girls’ basketball, and the next year, as their head football coach.  His coaching highlights include a 1A football player of the year (1997), the football comeback of the ages to defeat GHS (2005), competing against St. Augustine Nease and Tim Tebow in the regional final with Eastside, leading the Eastside Rams girls’ basketball team to 31 straight wins before being defeated in the state championship game and being recognized as the 4A state girls basketball coach of the year (2005).

While serving as Athletic Director for Newberry High School, he couldn’t resist the invitation to return to Gainesville and join P.K. Yonge where he knew he could put some teeth back into our football program. As a UF graduate, Coach Johnson viewed joining P.K. Yonge as a highlight in his teaching career and returned full circle to his Gator roots to grow and evolve his teaching practice at P.K. Yonge, a K-12 research institution affiliated with the University of Florida.

Many of Coach Johnson’s Blue Wave football players and students have expressed their gratitude for him as he “helped them grow as a person.” He is described as a good coach, even during the hard times. From Coach J, our students learned “Not to quit! No matter what you do, and do it for the experience” because, according to him, “We’re all we got!”

We are so grateful that Coach J joined our Blue Wave community. While “we are all we got,” P.K. Yonge will be one faculty member short on the team next year!

We wish Coach J the very best in his retirement. Go Blue Wave!