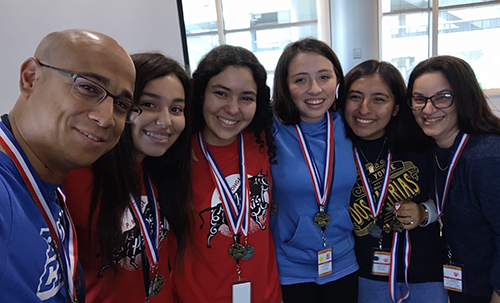 P.K. Yonge, a K-12 school diverse by design, upset the status quo at an engineering career day sponsored by the US Army Corps of Engineers on February 21 in Jacksonville. In an event traditionally attended by male participants, a group of 4 Latina high school students from P.K. Yonge took the honors as they competed with more than 25 other teams from 11 schools in North Florida.

Andrea Ortiz Burgado, Sophia Molina, Melanie Herrera, and Antonia Muňoz, took first place in the overall category which included a take-home engineering project, an on-site surprise engineering project, and an  engineering trivia challenge. P.K. Yonge’s Diverse Creativity Club sponsors José De León-Alejandro and Grisell Santiago were thrilled. According to Dr. De León-Alejandro, “We were excited to be taking such a diverse group of students to the event, and are beyond proud to see this group of four Latina students triumph in an engineering environment traditionally dominated by males.”

As P.K. Yonge strives to provide the best possible educational experience for students of all backgrounds, the future looks bright. The success of these Latina members of the school community is a testament to campus wide efforts to embrace diversity and promote STEM-based pursuits for all students across campus.

During the 2020-21 school year, the new secondary school facility and the new school schedule will extend P.K. Yonge’s focus on equity and access to enriching opportunities for all students. The new secondary facility, scheduled to open during the 2020-21 school year, will accommodate more students, thus allowing P.K. Yonge to increase enrollment at all grade levels 6-12. For families interested in learning more about P.K. Yonge, an admissions information evening will be held at the P.K. Yonge Performing Arts Center on Tuesday, March 3 at 6pm. Admissions | admissions@pky.ufl.edu | 352.392.1554

Diverse Creativity Club members Andrea Burgos Ortiz, Sophia Molina, Melanie Herrera, and Antonia Muňoz will be recognized by the local community at the International Foodtruck Festival at First Magnitude Brewery on Sunday, February 23rd, at 4:30pm. Celebrations at P.K. Yonge will be scheduled in the coming weeks.