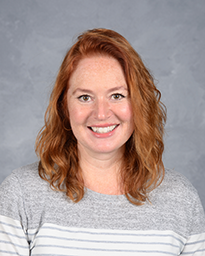 Ms. Snyder is a professional actor, director, choreographer, and theatre educator. She directs, choreographs, and designs multiple performances for our performers at P.K. Yonge. Ms. Snyder is a National Individual Events Adjudicator for the Educational Theatre Association (EdTA), and has been awarded All Star Director and Outstanding Director of a One Act at the Pennsylvania Thespian Conference.

Ms. Snyder’s MFA thesis project play, Young Summer, was a finalist in both the Kennedy Center MFA Playwriting Competition and the Source Festival Playwriting Competition. She is a member of the Dramatists Guild of America, a GRAMMY Music Educator Award Finalist, and has received the YCP Making A Difference Award on several occasions York College of Pennsylvania.

In addition to plays and musical theatre, Ms. Snyder enjoys improv and clowning! She prizes collaboration, creativity, communication, and critical thinking in her educational endeavors with both students and colleagues.

Ms. Snyder is guided by the premise that all students will be known, valued, supported, and challenged in her classroom.

BE PRESENT! BE INVOLVED!

“I regard the theatre as the greatest of all art forms, the most immediate way in which a human being can share with another the sense of what it is to be a human being.”– Thornton Wilder